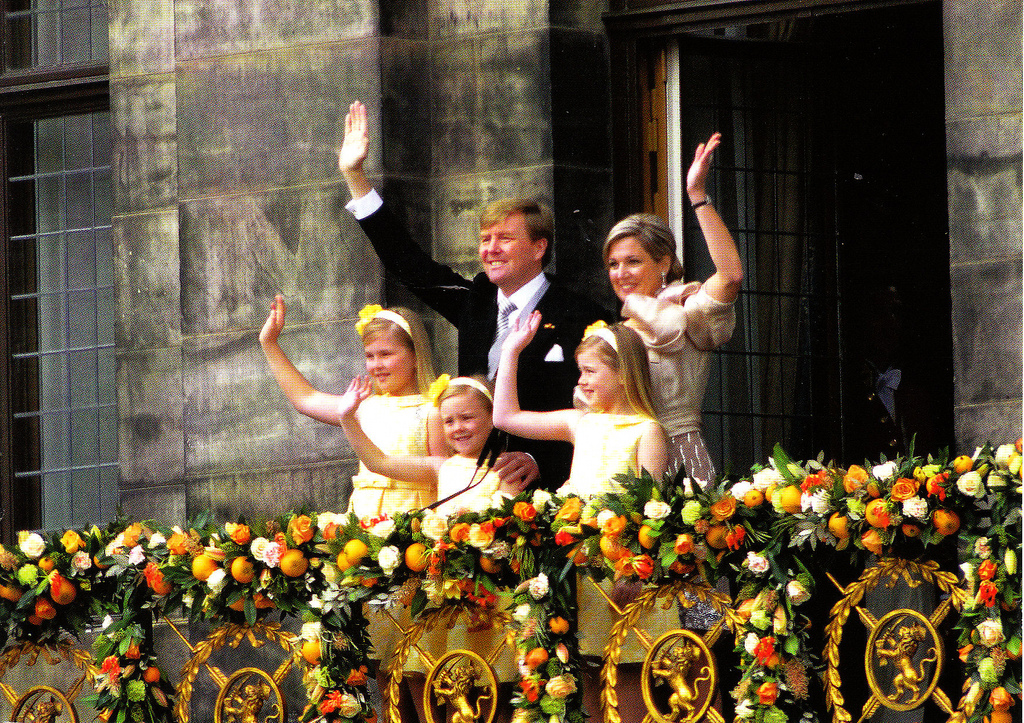 A week ago Liberation Day was celebrated in The Netherlands. To mark the end of German occupation during World War II –with rituals, concerts, and parties everywhere.

But first, there was National Remembrance Day on May 4th, an annual observance to commemorate those who died. With two minutes of silence all over the country. And the Dutch king and queen being present at the main square of Amsterdam for the ceremonies, surrounded by thousands of citizens gathering for the homage. With lots of press, of course, clicking and shooting the royals, especially at the moment the king and queen lay wreaths at the War Memorial in the middle of the square. To honor the victims of war and persecution.

Queen Maxima Of The Netherlands

Concerning the queen -I always wonder at this event: what’s going through her mind?

The extreme popular queen Maxima is the daughter of landowner and cattle farmer, Jorge Zorreguieta, a former member of the right-wing military dictatorship in Argentina headed by the infamous general Videla (1976 – 1983).

Tens of thousands of Argentines vanished without a trace during that period; innocent professionals, housewives, doctors, students, teachers, children, all tortured and executed. The picana, or electric cattle prod, was the most common means of torture.

Maxima Zorreguieta, born in 1971, was a schoolgirl in Buenos Aires during the junta years.

Their heads covered with white scarfs, the mothers used to be all over the news. Their quiet protest was raising international awareness of one of the most brutal episodes of state-sponsored repression in South-America.

The Queen And Her Dad

Until his death last year, Mr. Zorreguieta, Secretary of Agriculture and Cattle-Breeding under Videla -one of the longest members of the Videla clique, claimed never to have known of repression, disappearances, and executions in his country…

Altogether 10,00 to 30,000 people were kidnapped, detained, tortured, and executed in Argentina under Videla’s regime –often dumped out of airplanes over the ocean.

How Does It Feel?

In 2016 the Madres de Plaza de Mayo were still around, still wanting to know what had happened to their children.
Meanwhile, Queen Maxima, 45 -no longer daddy’s little girl, had become a mother of three.

Like I said, I always wonder: What’s going through her mind?

In the Netherlands around 100.000 Jews were murdered during World War II – 71.4 % of the pre-war Jewish population.

Anne And Her Family

Anne Frank was one of them. She and her older sister Margot died of typhus in the Bergen-Belsen concentration camp in February 1945. Their mother had already been murdered in Auschwitz, in occupied Poland. The father was the only one to survive.

The young Anne would never see her 16th birthday, but Anne Frank’s Diary, about her life in hiding during the Nazi occupation, would become one of the most iconic portrayals of the Shoah.

Other groups would follow, homosexuals, Roma, Sinti, Jehovah’s Witnesses, resistance fighters… They wouldn’t be the last. There have been massacres of millions of people all over the place, before and since World War II.

The One Big Difference

For Hitler’s Nazi Germany the physical elimination of all Jews was the central issue. It’s goal: to liquidate European Jewry.

How to Hide from The Truth?

Six million Jews were murdered during the Holocaust, or Shoah -making the systematic genocide of Jews the biggest crime in the history of mankind.

A Majority of Humankind Has Never Heard of the Holocaust, though, and worse: Has No Interest in the Subject…

What am I trying to tell here?

Anti-Semitism on the Rise Again

The hatred of Jews is terrorizing the world again. It is often presented as anti-Israel, or anti-Zionist sentiments, but at the same time, it’s reverting to hateful, old stereotypes.

Jew hating is the New Cool. It has become the norm. From Muslim communities to far-right groups to extreme-left youth.

How Does It Feel?

Again there are Jews being murdered in Paris and other French cities. Like retired doctor and Holocaust survivor, Sarah Halimi, who was being pushed of her balcony by a neighbor, shouting Allah Akbar.

Synagogues are attacked by mobs and firebombs.

Police officers with machine guns are guarding Jewish schools in Sweden, Germany, France and The Netherlands.

A group of Syrian refugees called the Holocaust a Jewish conspiracy, explaining it’s what they had learned in school, back home.

The Other Side of Things

There is this poem from a German Protestant pastor, an early Nazi supporter, but later imprisoned for opposing Hitler’s regime: