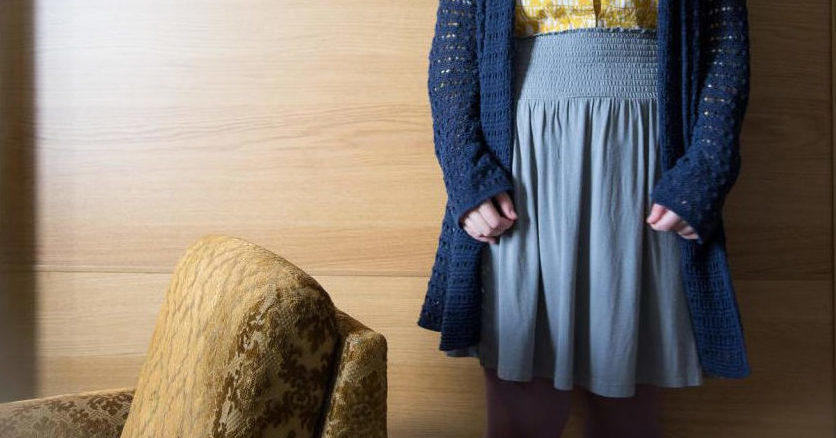 My ideas about death- me being totally against it, haven’t always been the same. On the contrary. When I was 13 years old I tried to kill myself. A hand full of pills, stolen from my grandmother’s, hidden in the drawer next to her bed.

My parents, clearly alarmed, sent me to a psychiatrist. I told him I was done with life. I just wanted it to be over. It was all I could come up with. Of course, there must have been more to it, or I wouldn’t have failed.

The psychiatrist was a busy man. His waiting room always full of people, most of them old, or what was old to me: in their thirties and forties. His sessions never took more than 10 or 15 minutes.

He used to sit at a big, mahogany desk, in a purple jacket, decorated with stitches on the front. Piles of books in front of him.
All I heard was a voice from behind the books: ‘Good morning…’
It was his standard welcome. Not once would he call me by my name. I wondered if he even knew what it was.

He was always writing things down when I entered the room, and I made it a custom to wait at his door.
‘Sit down..,’ he would say after a while. ‘Sit down…’ Without looking up.
‘How are we today…?’
He would still not look at me. Swiftly scribbling away.

Most of the time I would just be sitting there, in front of him. Waiting. I had no idea what was expected of me.
Every session he would repeat his question: ‘How are we today..?‘

It took me quite a while to be able to say something. Anything. Some stupid event at school. Or some minor clash at home. He got into this habit of saying: ‘Yes…! Yes…!’ His fingers at the edge of the desk.
He didn’t question things. My stillness and impassivity were a matter of uncertainty on my side, he explained. I was too sensitive.

One day, during one of my regular silences- maybe a bit longer than usual this time, he told me how the brain itself couldn’t feel any pain.
‘Ohh…’
‘Did you know that?
I shook my head… What was I supposed to say?
I know now that our brain is insensible to injury indeed. But so what? Had I stabbed a knife into my head? What did he mean? Even today it still doesn’t make any sense to me. At the time, though, I was truly puzzled by his remarks.

He often told me I should go out, play with friends, enjoy life… I agreed.
At the end of the session he would hand me a new prescription for anti-depressants and tell me to come back in three weeks time. It was fine with me…

When the school holidays began my mum and I left for France. My dad lived there and we often spend the summer at his place, near a small town along the French coast. While my dad would be at work, my mum was busy around the house. At night they were seeing friends, went out for drinks, dinners… Or there were concerts to attend to; the only time they listened to music, as far as I know. There never was any music in our own house.

My parents were always taken over by things, occasions, people. Even books. After my dad had decided to read Proust in French, he became a member of the local library and submitted himself to their reading club once a week.

Of course, they were their own boss. They didn’t have to be in bed on time, like me, or clean up their room- life was completely theirs. They were free…
Yet they were forever preoccupied; active in ways grown-ups were always busy, it seemed. Mysterious and incomprehensible.

I remember endless days on the beach on my own, surrounded by unfamiliar faces. Followed by infinite evenings in my room, waiting for the hours to pass. I was hoping for some clarity, searching for a self, wherever it was, whatever it could be. I did try. Books… Films… Plunging into the lives of others as a way to make sense of your own. I was too fragmented. It was impossible to concentrate. Nor did I recognize anything about myself anymore. I had vanished into a universe were nothing made sense. The meaning of life… The purpose of our existence… My own existence… I couldn’t grasp it. I’d gone to pieces and I didn’t know how to put myself back together again. I wasn’t sure I wanted to…

On a rainy afternoon I found this book at a bookshop near the library. A novel in French, by a Hungarian author. It had been translated in 27 languages, I believe.

I never read the book, I don’t know why. It was just the cover. It had a glossy, green-black outside. A picture of a girl in a bright red skirt. She seemed to jump off the book, smiling, diving right into the world. Full of energy. Full of life.

The book changed things. Slowly. Almost unnoticed. I used to take it with me, wherever I went. Things felt different when I had it close at hand. Better. As if it did speak to me, reassuring me of a life I could have- the girl I could be. It promised me a future. One day. If I would just sit it out…